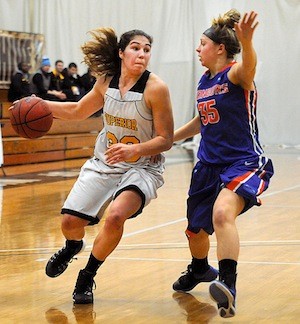 MADISON, Wis.--University of Wisconsin-Superior’s Sally Linzmeier was selected the Player of the Year for the second straight season to lead the individuals chosen to the 2015 All-Wisconsin Intercollegiate Athletic Conference (WIAC) Women’s Basketball Team by the league coaches. In addition, the Yellowjackets’ Donald Mulhern was named the Coach of the Year.

Linzmeier is the fourth individual in conference history to win the award in back-to-back seasons, joining UW-Stevens Point’s Amanda Nechuta (2004-05) and Sam Barber (2012-13), and UW-Stout’s Kelsey Duoss (2006-07). She collected first team recognition for the third straight season after claiming honorable mention laurels in 2012.

Linzmeier was also selected to the six-member All-Defensive Team for the fourth straight year, joining UW-Whitewater’s Kaitlyn Thill (2011-14) as the only four-time selections in league archives. UW-Oshkosh’s Katelyn Kuehl and UW-Stout’s Katelynne Folkers were repeat choices on the squad from a season ago.

Mulhern claimed the coaching prize for the second time in his career after directing the Yellowjackets to the first WIAC title in program history. UW-Superior also registered 19 victories - tied for the highest single-season total in program archives.

An All-Sportsmanship Team was chosen for individuals that displayed exemplary sportsmanship throughout the season. It included one member from each school.

Click here to read the full article on wissports.net »