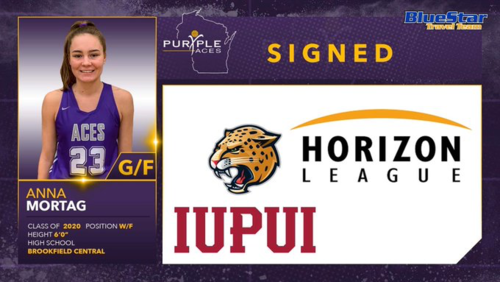 INDIANAPOLIS – IUPUI women's basketball head coach Austin Parkinson announced the signing of three players to National Letters of Intent for the 2020 recruiting class on Wednesday (Nov. 13). The class features two players from Illinois and one from Wisconsin with all three players bringing unique games to the Jaguar program.

"This is a talented group of young ladies joining our program," said Parkinson. "I love the balance of this class. You have a lightning fast point guard who can really create, a versatile wing who can score the basketball, and a back to the basket post player who can block shots. We expect this group will have a tremendous impact in the coming years at IUPUI."

"Anna is an incredibly versatile wing who can play multiple positions both offensively and defensively," said Parkinson. "She can score from all three levels whether it is attacking the rim off the bounce, her midrange pull up game or her ability to stretch the defense from the three point line. She will no doubt be one of the best players to come out of the state of Wisconsin this year and thrilled she is joining our program."

Trinity Duckworth comes from Hillcrest High School in Country Club Hills, Ill., where the point guard has racked up multiple honors. In each of the past two years Duckworth has been named Player of the Year for her team as well as MVP of her conference and All-Conference. As a junior, Duckworth was named Second Team All-State. She comes from a strong basketball family, her cousin Kevin, played in the NBA.

"Trinity will be the fastest player with the ball in her hands at IUPUI the moment she arrives," said Parkinson. "This young lady is tough as nails and plays with a chip on her shoulder.  She has a unique ability to create havoc on defense and at the same time control the tempo by making others around her better on offense.  IUPUI fans will love seeing her flying up and down the court in a Jag uniform."

The class is rounded out by 6-foot-4 center Jenna Cotter. Cotter played at Lockport Township High School in Lockport, Illinois and has been named Joliet Herald and 22nd Century Media Honorable Mention All-Area during her career. Cotter has also been named to the Willowbrook Lady Warriors Thanksgiving Invite and Oswego East Holiday Classic All-Tournament Teams. In the classroom, Cotter has been a member of the National French Honors Society each of the last three years.

"Jenna not only has excellent size, but tremendous length as well," said Parkinson. "She has really good hands, runs the floor hard and really works hard to seal down low.  What I like best is every single time she steps on the floor she is constantly improving.  We have had a lot of success developing the post position here and Jenna has all the tools to fall in line with that tradition when she gets to IUPUI. "