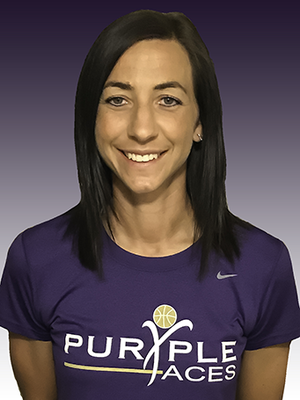 Erin joined the Purple Aces coaching staff in 2011. She has coached various high school level teams since joining us and plays a vital role in our player development. Erin is the former Head Coach of the Southwest High School’s girls basketball team. Prior to that she was an assistant coach at Notre Dame Academy in Green Bay and has helped lead the Tritons to back-to-back WIAA State Championships in 2013 & 2014.

Erin played high school basketball at Richland Center, where during her senior season in 2004, she averaged 13.5 points, 7.4 rebounds and 3.6 assists per game enroute to guiding her Hornets team to the WIAA 2004 Division II State Final. For her efforts, Erin was named Wisconsin State Journal Player of the Year. She was also a three-time Conference MVP and member of four consecutive Conference Championships for Richland Center.

Following her very successful high school career, Erin played collegiately at UW-Green Bay beginning in 2005 under Coach Kevin Borseth. Of her many athletic accomplishments, Erin is especially proud of being named to the Horizon League Academic Honor Roll for each of her four years at UWGB. While at GB, Erin was best known for her strong defense, unselfish play, and relentless work ethic. Among her many honors and awards are: 2007 UWGB "Most Improved Player"; 2009 Div. I-AAA Athletic Director's Assoc. Scholar Athlete; 2009 "JoAnne Jennings Award" recipient.

Erin brings her knowledge of and enthusiasm for the game to the Aces family and looks forward to working with all of her players to help them achieve their dreams.