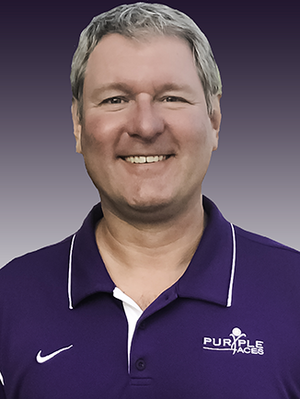 Ted Stefaniak is back for his 13th season with the Purple Aces. He coached our Class of 2017 & 2019 teams and helped 14 players find a college to attend and continue their basketball careers.

Ted joined Purple Aces in 2009 and has led teams at both the grade school and high school levels. He is a former assistant coach at West De Pere High School, but you may have seen him around your gym with a camera crew. He has been broadcasting high school and college sporting events since the early 90's and was the play-by-play announcer at the WIAA State Basketball Tournaments for 15 seasons. Ted currently provides play-by-play for the Wisconsin Herd of the NBA G-League and also announces UW-Green Bay Phoenix men's and women's basketball games on ESPN+.

Ted played high school ball at Carmel Catholic in Mundelein, Illinois. He was recruited by Basketball Hall of Famer Willis Reed and played at Creighton University in Omaha, Nebraska.

His passion is basketball player development and helping student-athletes pursue an opportunity to play at the collegiate level.