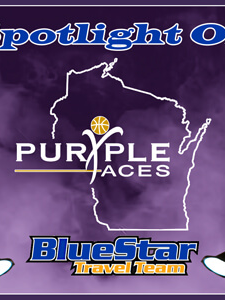 Lavesa made her Purple Aces coaching debut with our 8th grade team in 2019. Glover was an Assistant Coach at Green Bay Southwest HS, and has coached various high school level teams before joining the Purple Aces. Glover also has experience at the collegiate level including stints at  Southeast Missouri State University, Valley City State University, LSU-Eunice and UW-Milwaukee.  Prior to the Purple Aces she was the Head Coach at Orono High School in Long Lake, MN where she helped lead the Spartans to the MSHSL 3A State Championship in 2016-17.

Lavesa played high school basketball at Dade Christian School (Miami Lakes, FL) where her #34 jersey is retired.  During her senior season, Lavesa averaged 22.0 points, 18.4 rebounds and 3.6 blocks per game while guiding her Crusaders team to the FHSAA 2004 Division II State Championship game. During her High School career, Lavesa was a 3-time All-State selection, was the 3A-1A  Dade County Player of the Year and also played against WNBA players Sylvia Fowles (MN Lynx) and Erlana Larkin (MN Lynx). Lavesa was a two-year starter and four-year letterwinner at UW-Green Bay from 2005-09, playing alongside Purple Aces coach Erin Barkley. She was an all-league second-team performer as a junior and was selected to the first team as a senior.  In her career she scored 1,054 points and pulled down 447 rebounds while shooting 51 percent in 122 career games for Green Bay, leading the team in scoring as a senior. After graduating, she played professionally, spending time with teams in Finland, Poland and Australia.

Lavesa loves the game of basketball and is extremely dedicated to the development of her players on a holistic level while ensuring that they continue to LOVE the game! Lavesa currently works for the Green Bay Area Public School District.