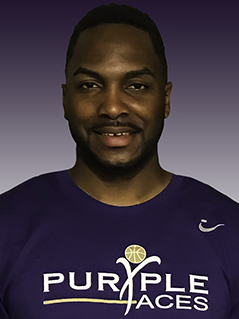 Cordero joined the Purple Aces family in the 2012 season as an Assistant Coach. Cordero has brought a tremendous amount of talent, energy, knowledge, and passion for the game of basketball to the Aces program.

Born and raised in Racine, Wisconsin, he played high school basketball at Racine St. Catherine's under legendary coach Bob Letsch and was a key contributor in leading them to the WIAA 2005 Division II State Championship as a Senior. For his efforts, Coach Barkley was named Second Team All-State, Second team All-Area by the Milwaukee Journal, and was voted Racine County and Lakeshore Conference Player of the Year. He was also a State Qualifier in the High Jump.

Cordero was recruited by and played basketball for Tod Kowalczyk at UW-Green Bay, where he has many fond memories on the court as a Phoenix. Off the court, he was one of only 1,840 nominees from 462 schools to be selected by the NCAA Leadership Development Committee to represent UWGB at the 2008 NCAA National Student Athlete Development Conference.

Today Coach Barkley works in the banking industry, and spends much of his time working with area basketball players to improve their skills. Cordero also provides color commentary for the UWGB Phoenix Men's and Women’s Basketball home games on ESPN3 and Spectrum Sports.